Now that we know Ohm's Law let us investigate the device the has been designed to offer electrical resistance - the resistor.

Resistors come in several shapes and forms and are constructed from different materials. There are carbon resistors, wire wound resistors, metalized and variable resistors. Some special types of resistors include Voltage Dependant resistors (VDR) and Light Dependant Resistors (LDR).

Fixed value resistors are typically of the carbon variety. They are made from carbon that has been doped to offer specific resistances. The ease of production makes carbon resistors very cheap and  thus they are utilized in many electrical devices.

Resistance wire, which is an alloy that offers fairly high resistivity, is used in the construction of wire wound resistors (these are typically precision resistors). It is also used in filaments and elements.

Variable resistors are also created from resistance wires. These are usually three terminal devices. There are leads connected to both ends of the wire and a sliding contact that allows contact to any section along the length.

Voltage Dependant Resistors are designed to offer resistance that is related to the voltage that is applied across the resistor. It is non-Ohmic. That is, it's resistance value is not constant for different applied voltages. 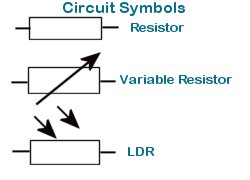 The value of carbon resistors are printed on the resistor as a color code. The code consists of three bands that give the value and a fourth band that gives a tolerance level.

If the tolerance band is red then the resistors value will be within 2% of the stated value, gold 5%, and silver 10%. No forth band indicates a 20% tolerance.

For each of the following color sequences determine the corresponding values,

What color sequences correspond to the following values?

Resistors in Series and Parallel

In a series connection devices are connected end to end like in a chain.

Resistors may also be connected in parallel as shown in the diagram below. 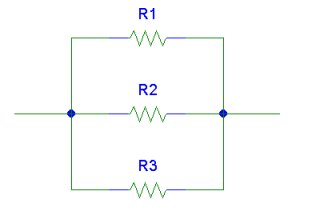 In a parallel connection  the two ends of the resistors are connected. (This wording may be misleading. Please refer to the diagram.)

Below we have a series/parallel connection .

Let us now try to determine the equivalent resistance of series and parallel resistance combinations. 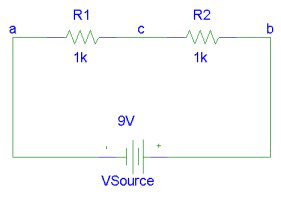 The diagram shows two resistors in series connected across a 9V battery. Suppose that R1 and R2 are replaced by a resistor R whose resistance is such that the current flowing through R would be the same as that which would flow through the R1, R2 series combination in the circuit. This resistor will have a value that is the equivalent of the series combination of R1 and R2.

The voltage across R is related to the current through it according to Ohm's law as follows,

The current through R1 and R2 is also I. Using Ohm's law we get,

Since the voltage across the series combination of resistors is the same as the source voltage, V

Substituting the equivalent resistor for the series combination we get,

This can be extended for any number of resistors in series.

Three resistors are connected in series. Their values are 1k, 3.3k and 4.7k. What is the total resistance offered by the series combination?

A student needs a 5.1k resistor to complete a circuit but none are available. What series combination of 4.7k, 3.3k, 100Ω, 300Ω resistors do you suggest he use?

What current flows through two bulbs which are connected in series across a 120V power supply? Assume that each bulb has a resistance of  140Ω. 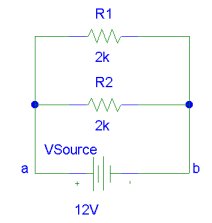 Let us now examine the equivalent resistance of resistors in parallel. Now an equivalent resistor R can replace the parallel combination of R1 and R2 such that the voltage Vab is unchanged and the current through R is the total that would be drawn by R1 and R2.

Let us transpose the equations to make current the subject,

But we know that for the equivalent resistor R the current draw is the sum of the currents drawn by R1 and R2,

This can be extended for any number of resistors in parallel.

A student needs a 69Ω resistor and decides to parallel a 100Ω with a 220Ω as a susbstitute. Is that an appropriate solution if the resistance must be within 5% of 69k?

The equivalent parallel resistance is given by

We can arrive at the same result by using the symmetry of the situation. The equivalent resistance of two identical resistances in parallel is half of the resistance.

Since the voltage, V, across the resistors are the same and their resistances are the same; the same amount of current, I, flows through each resistor. 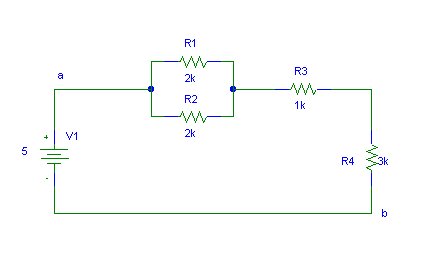 The resistor network between points a and b can be replaced by a single resistor such that it has the same effect in the rest of the network as the original subnet. 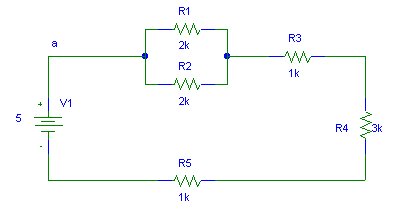 What is the voltage across and the current through R5?

This circuit has the subcircuit between a and b of the previous example inn series with R5. It can be simplified as follows. 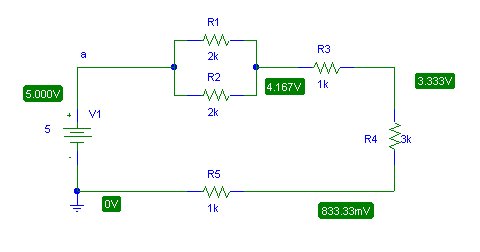 The above schematics shows the results obtain using a circuit simulator. We can immediately see that our answer was correct. When faced with a complex circuit and we only wish to determine voltages or currents for some components it is usually easier to replace other subcircuits (in the network) by simpler equivalents to simplify calculations.

By simplifying the subcircuit between a and b verify the voltage and current for the load resistor in the following circuit. You should get an equivalent resistance Rab ≈ 1k. 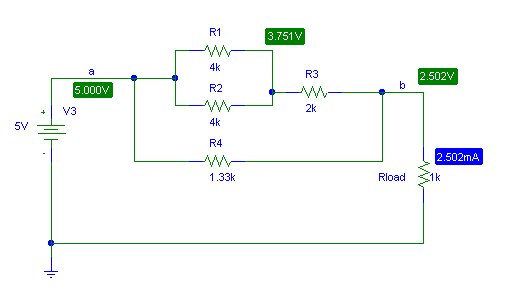 Variable resistors may be connected in circuits as rheostats and potentiometers.

Pots (but no pans)

When all three terminals are used the device functions as a potentiometer. A given potential is connected across the fixed terminals and a proportion is tapped using one fixed end and the variable arm. 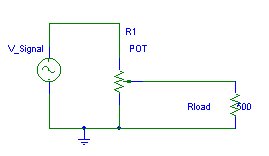 Rheostats are used to increase or decrease the resistance in a circuit. Thus only two terminals are used, one fixed arm and the variable arm. 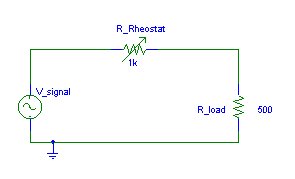 What does Resistance Depend On?

Several factors affects the resistance of materials. Here are some of the majors:

But why do all these factors affect resistance? To understand the answer to this question you may find it useful to revisit the lesson on electron theory.

The diagram shows two pieces of a metal wire that are identical except for their cross-sectional area. Which wire do you think will offer a greater resistance to the flow of electric current?

If you consider the water in a pipe analogy you would guess correctly that the thick wire offers less resistance that the thin wire.

A larger cross-section contains a greater amount of molecules and hence more electrons for conduction.

This diagram shows metal wires that are identical except for the length. Which would you expect to offer greater resistance to current flow?

Well if it were water flowing through pipes we would get a greater flow rate if the pipe were short rather than if it were long due to more friction in the longer pipe.

I'm sure you've guessed that the short wire offers less resistance. There are less atoms for drifting electrons to bump into in a short section compared to a long section.

How does temperature affect the resistance of a material? Well, for metals and most materials in fact, the resistance rises as temperature rises. This is because temperature affects the motion of the atoms and molecules in the structure. As temperature is increased molecular vibrations and rotations increase in magnitude and frequency. This makes it more difficult for electrons to flow through the material. (Consider, as an analogy, trying to throw a ball through a stationary fan blade and then through a rotating fan blade. Which do you think will be easier?)