In the previous lesson we examined the factors that affect the resistance of materials. For a length of wire two of those factors are length, l, and cross-sectional area, A.

Thus we may write,

where ρ is constant for a given material

ρ is called the resistivity of the material. Its SI unit is Ω.m (Ohm-meter)

Resistivity is independent of the shape of the material, a wire was used as an example to simplify the calculations. (Only two variables, length and CSA).

Resistivity may also be defined in terms of the current density, J, at a particular point in a substance and the electric field, E, at that point.

The conductivity, σ, of a material is simply the inverse of its resistivity.

Temperature Coefficient of Resistance and Resistivity

The resistivity and hence resistance of a substance is affected by its temperature. The reasons were discussed in the previous lesson - Resistance.

The relationship between temperature and resistance is fairly linear over a wide temperature range. Thus a straight line equation is used in the definition of the temperature coefficient of resistance.

The temperature coefficient of resistance, α :

From the equation one can deduce that α has units K-1.

Graph of Resistance vs. Temperature: 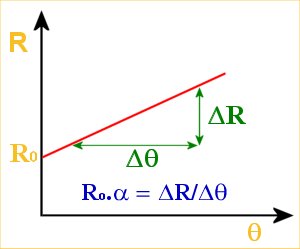 We may instead wish to examine the variation of resistivity with temperature. A linear approximation is used giving:

Answer: The nichrome wire now has a resistance of 0.383Ω.

Resistivities and Temperature Coefficients of  Some Common Materials
(at 20°C)

As the table shows metals have positive temperature coefficients of resistivity as well as low resistivities.

Silicon, which is a semiconductor, has a negative temperature coefficient of resistivity an a fairly high resistivity.

Insulators such as glass and fused quartz are characterized by very high resistivities. (Very high resistance → Very low or no current flow even when subjected to high pd's → good insulator)

The table shows that silver is the best conductor, then copper then aluminum. Conductivity however is not the only factor to consider when choosing electrical conductors. Availability and cost must also be considered.

Power Transmission lines are made from aluminum because it is the cheapest of the three and the losses incurred (heat losses due to resistance of lines) are not significant enough to warrant using  the rarer and more expensive copper.

Silver being the most expensive is only used in small components where copper would not be appropriate. IC packages sometimes use silver leads.